Our ‘Top Trees’ series typically highlights Martin’s favourite trees 'under 10 metres' for use in urban home landscapes – not so this time! The following trees definitely grow quite larger –such as the Eastern white pine, which can reach great heights of up to 25 metres in cultivation! AKA "the tallest tree in eastern North America."

... As we fall into fall, we thought we'd highlight some of the quintessential classics seen throughout Canada's vast landscapes.

All noted trees are designated for Zone 5 (or under), and are native to, or naturalized within, Ontario.

Eastern white pine easily lives to be 200 to 250 years old; some live over 400 years. It is known as the tallest tree in eastern North America.

Typically grows 50-80' in cultivation – but will grow to 100' tall in the wild, with records existing to over 200'. Grows approximately 3 feet (1 m) per year between the ages of 15 and 45 years – with slower height increments before and after that age range. Landscape size and shape can be controlled through pruning. 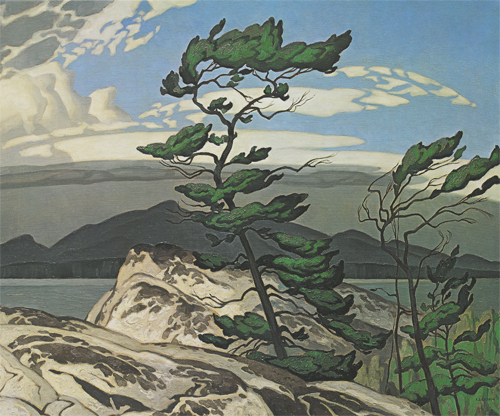 Although pyramidal in its early years, Eastern white pine matures to a broad oval habit with an irregular crown. Bluish-green needles are 2 to 5 inches (5-13 cm) long and appear in bundles of five. Flexible, finely serrated and soft to the touch, needles persist for 18 months on the tree before being shed by abscission.

Distribution: This species is found naturally from Newfoundland west through the Great Lakes region to southeastern Manitoba and Minnesota, and south along the Mississippi Basin and Appalachian Mountains to northernmost Georgia and Mississippi.

Eastern white pine forms mixed stands with Canadian hemlock (Tsuga canadensis), oaks (Quercus species), or American elm (Fraxinus americana). It has been naturalized in the Czech Republic's Carpathian Mountains and southern Poland due to specimens planted as ornamental trees in gardens and parks.

Problems: The white pine weevil and white pine blister rust, an introduced fungus, can cause damage or death, although mortality rates from rust is only about 3% today

Quercus rubra, commonly called red oak or northern red oak, is a medium sized, deciduous tree with a rounded to broad-spreading, often irregular crown. Typically grows at a moderate-to-fast rate to a height of 50-75' (often larger in the wild) with height increases of more than 24" per year. Native to eastern North America. 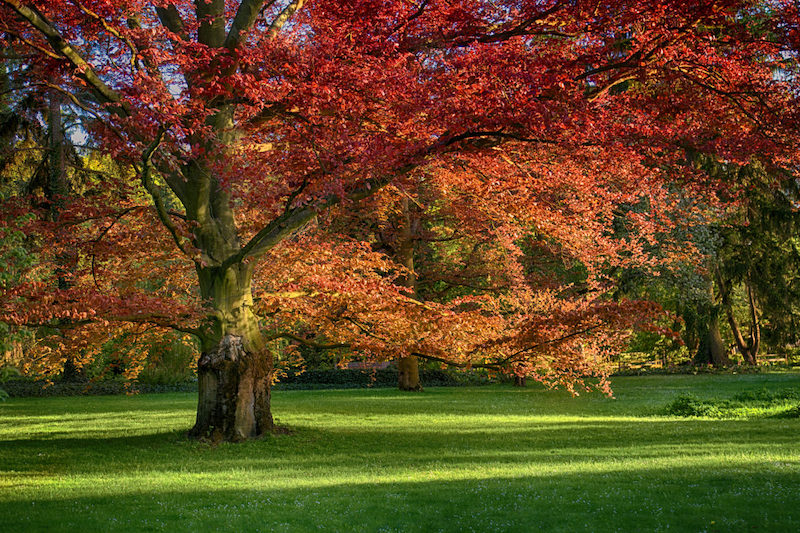 Dark, lustrous green leaves (greyish-white beneath) with 7-11, toothed lobes which are sharply pointed at the tips. Leaves turn brownish-red in autumn. Insignificant flowers in separate male and female catkins appear in spring. Fruits are acorns (with flat, saucer-shaped cups) which mature in early fall. An abundant crop of acorns may not occur before this tree reaches 40 years old.

Wildlife Value: Acorns from this tree are at the top of the food preference list for blue jays, wild turkeys, squirrels, small rodents, whitetail deer, raccoons and black bears. Deer also browse the buds and twigs in wintertime.

History/Lore: A favourite of both lumbermen and landscapers since colonial times. It is believed that Bishop Compton's garden, near Fulham in England, received the first red oak transplant abroad in the late 17th century. In 1924, there were over 450 acres of red oak plantations in Baden, Germany.

Betula nigra, also known as or River Birch, is a deciduous, upright, flowering tree with peeling cinnamon-brown bark, graceful branches, and yellow fall foliage. It is perhaps the most culturally adaptable and heat tolerant of the birches.

It can be trained as either a single- or multi-trunked tree. As a single trunk tree, it develops a pyramidal habit but matures to a more rounded shape over time. Multi-trunked trees form a more irregular crown - typically considered as the superior growth habit for this species.

This tree grows at a medium to fast rate, with height increases of anywhere from 13" to more than 24" per year. 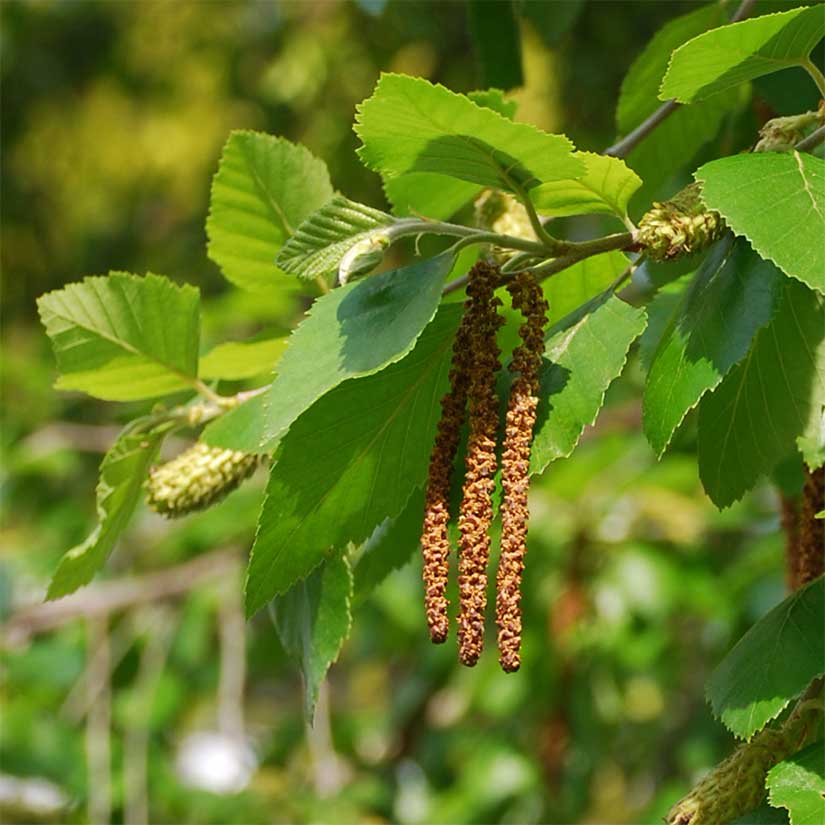 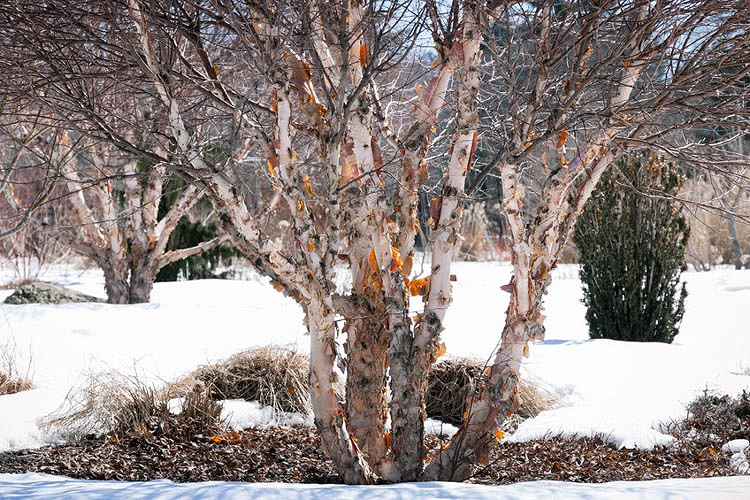 Birches are considered a "pioneer" species as they tend to grow quickly when young.

River Birch features glossy green leaves are 2–3" long; margins are double-toothed and leaves are arranged alternately. Produces brown and green catkins in April and May and yields a large number of tiny nutlets after female catkins mature (typically in May and June).

Zones 4-9. Adaptable and heat tolerant, River Birch prefers wet sites and does best in moist, acidic, sandy, or rocky, well-drained loams in full sun to part shade. The best foliage colour occurs in full sun. This species is naturally found in riverbanks, stream banks, and floodplains. Though they do best in moist conditions, they tolerate drier soil better than other birch trees do.

It will tolerate moderate flooding as well as some drought.

In the landscape, keep the tree consistently moist with soaker hoses and heavy mulches. Requires little pruning, but if necessary, prune during the dormant season. Do not prune in winter or spring.

Wildlife Value: The catkins are used by redpolls and pine siskins. Foliage is eaten by deer and other browsing mammals. Songbirds feed on its small but numerous seeds.

Problems: Prone to shedding its interior leaves during droughts and dry periods and can become stressed by summer heat and humidity. Resistant to the bronze birch borer.

A beautiful, small flowering understory tree, ideal for shady landscapes, Acer pensylanicum AKA Striped Maple stands out with its striking green and white striped bark and large 3-lobed leaves - the largest leaves of any Ontario maple.

Striped Maple's bark and keys are an important food source for many species including moose, deer, beaver, deer, songbirds, and small mammals. 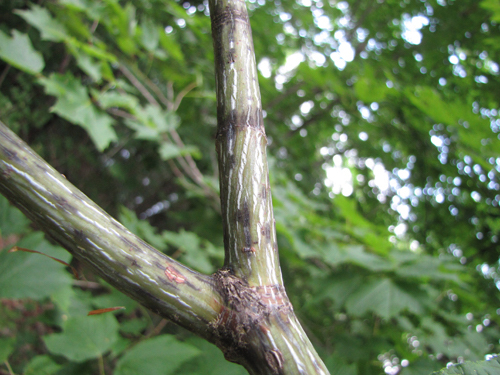 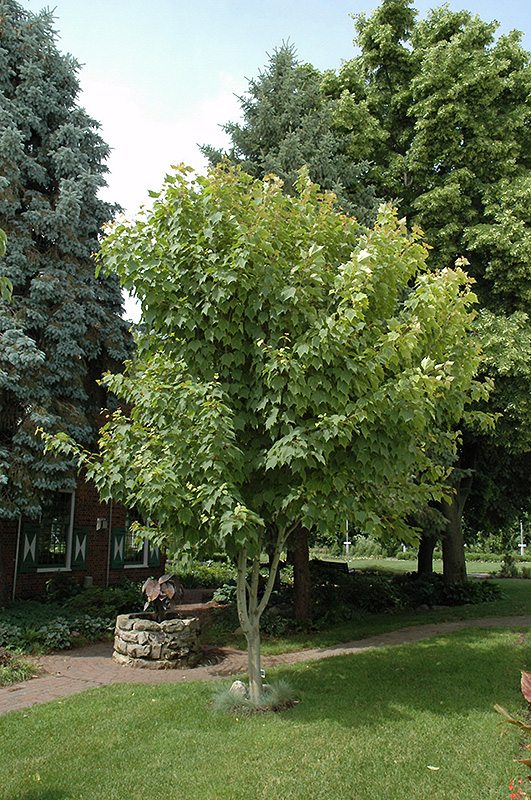 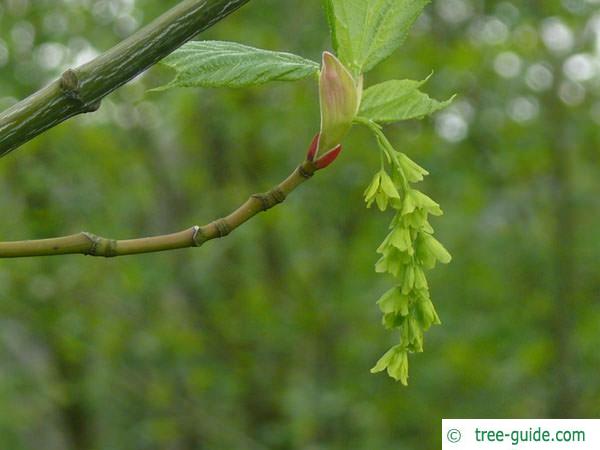 Striped Maple has large, wide leaves with only 3 main lobes. Leaves turn yellow in the fall. The flowers and winged seeds hang in long clusters, maturing in the fall.

Even in ideal habitats, Striped Maples have open crowns and are relatively short-lived. They are slender, narrowly branched trees, an ideal fit between trees beneath the forest canopy.

Their native range forms a rough triangle: from New Brunswick to southern Ontario, down the Appalachians, and lessening in numbers through North Carolina's mountains and northern Georgia's highest elevations.

1. The Arboretum, University of Guelph